The best self defense rifle should be a weapon that you can easily carry in your bug out bag and use with limited defensive capabilities.

Let’s talk about these so-called self defense rifles. When I say self defense rifle, I am not talking about your main battle rifle. Your AR-15 is a good all-around rifle, but it’s best if you use it for self-defense. A self defense rifle in this sense is one that you can easily carry in your bug out bag and use for general survival measures with limited defensive capabilities.

These rifles are almost exclusively.22 long rifles, and while this limits defensive capability, it does still have considerable capability. The .22 long rifle is an excellent survival caliber for a lot of reasons. First off, there’s the sheer amount of ammunition you can carry. You can throw a 500-round brick in your backpack without a huge difference in weight, and it hardly takes up any room. The .22  rifle is often very cheap and common, except for the occasional ammo scare that dries up the supply. Because the rounds are cheap and easy to find, a person can get a lot of practice with their .22 rifle. These rifles are not only handy in a SHTF situation, but in any outdoor hunting and hiking situation.

These rifles will not replace your main battle rifle, but they will serve to complement your primary weapon. These weapons are designed to become very compact and disappear into a pack, making them very handy and very convenient to carry.

So, we will define these self defense rifles for the sake of this article as small, concealable, shoulder-fired, small caliber rifles. These rifles will be general-purpose rifles or even more like “jack of all trades” rifles.

We will start with an original rifle—a very unique, very odd looking little rifle. The Henry AR-7 was designed for Air Force pilots all the way back in 1959. Since then, developers have slightly upgraded the weapon throughout the years and it has become a camper’s best friend.

The AR-7 is a semi-automatic rifle that fires from an eight-round box magazine and comes with two magazines. The rifle is a takedown rifle and conveniently breaks down into three components. The rifle breaks down into the barrel, receiver, and buttstock. In addition, the barrel and receiver both fit inside the hollow buttstock. The buttstock is water resistant and has the ability to float (should it find its way into water), and if it takes a fall, it is impact resistant. The rifle only weighs three and a half pounds and is less than seventeen inches long when packed into the buttstock.

Putting the weapon together is incredibly easy and quick. The receiver attaches to the stock and the barrel screws into the receiver. Construction and take down is completely toolless. Both the barrel and receiver are coated with ABS plastic and Teflon to completely and absolutely resist corrosion.  Handling the weapon is odd at first, as you lack a forward grip and are forced to either grip the thin barrel or the front of the receiver. However, the light recoiling round makes it easy to control and shoot accurately. One of the key advantages I see for this self defense rifle is the price. In fact, for less than $300, this weapon can be yours.

Now, this is another odd rifle that has been around for a few decades, but unlike the AR-7, the M6 Scout never made a huge splash in the firearms industry. This is probably due to the weapon’s odd appearance and limited capabilities. The M6 Scout is made by Springfield and has been around since the 1970s. Recently, the rifle has had a bit of a resurgence with the increase in people becoming more prepared for less-than-optimistic situations.

The M6 Scout has the distinct advantage of being chambered in both .22 long rifle and .410 shotgun rounds. We’ve gone over the .22 long rifle, but the .410 is its own handy cartridge. Like any shotgun shell, there is a variety of different loads that the .410 can hold. The main three are birdshot, buckshot, and slugs. The .410 is capable of taking medium and small game at close range.

The .410 birdshot round is a proven snake destroyer, and the slugs have their place in self-defense and hunting. The M6 has one less than desirable feature: it’s an over-under double-barrel weapon. The top barrel is .22 and the bottom barrel is .410. The advantage of a .410 barrel is that gauge adapters will allow you to fire rounds like 9mm and 38/357 out of your shotgun barrel.

For compactness, the rifle breaks in half at the breech. Consequently, you can store the firearm in a very short package. The rifle is very lightweight and very Spartan. There is almost no furniture on the rifle, and this keeps the weapon lightweight and compact. The stock does open and it allows you to store ammo inside.

This is a very unique firearm that’s quite an interesting weapon to shoot. The ability to fire precision rifle shots or a wide variety of shot is something any backpacker or prepper can appreciate. This weapon may not match the firepower of the AR-7, but it does beat it in versatility.

The Ruger 10/22 needs no introduction. This self defense rifle has been the poster gun for all .22 rifles for the last 50 years. The Ruger 10/22 is an incredibly versatile rifle with more accessories than any rifle I’ve ever seen. This is America’s .22 rifle. The newest model combines the well-known Ruger platform with the ability for you to break it down into two pieces.

This rifle is probably the least compact of the three, but it offers the most comfort and reliability. The Ruger is an incredibly reliable weapon, and the amount of accessories available is staggering. The list includes high-capacity magazines, scope mounts, sights, and the ability to switch out the integral parts with easy-to-find match-grade pieces. Take this little .22 and load it with a BX 25 magazine and a red dot sight, and you’re ready to rock and roll all day long.

The weapon is probably easier to strap down than it is to pack. Even so, it’s still plenty easy to transport. Ruger even offers a backpack with Molle straps and a very prominent Ruger logo (not very discreet) that they’ve designed perfectly for carrying the weapon. You can never go wrong with a Ruger 10/22.

If you are interested in a larger caliber takedown rifle, I have recently come across two that are very interesting. The first is an AR-style carbine chambered in a variety or in pistol rounds. The next rifle is a full-sized Browning hunting rifle. These weapons are larger and heavier but considerably better for defense and hunting.

The Aero Self  Defense Rifle

The Aero survival rifle is designed to resemble the look and feel of an AR, but it is chambered in a pistol caliber. The little carbine accepts Glock magazines, so you know that plenty of high-capacity options will be available. The weapon is chambered in 9mm, .40 caliber, and .45 ACP. Moreover, the ammo can be interchangeable with your sidearm.

The rifle comes apart without tools, and it breaks into less than half its normal length. It drops easily into a backpack, giving you a close-to-medium-range hunting and self-defense weapon. This self defense rifle features some rail space for optics or folding iron sights as well as a flashlight or foregrip. The stock is an M4-style six-position adjustable.

Browning is a very well-known firearms maker of high-quality rifles, handguns, shotguns, safes, and just about everything else in the firearms world. Their lever-action takedown rifle is no different. This rifle is an excellent choice as a hunting rifle, and it even has some excellent defensive capabilities. For those poor folks who live in a less-than-free state like California or New York, this rifle is completely legal in either—for the time being anyway.

The weapon feeds from a detachable box magazine and can chamber full-powered rifle rounds. The weapon can be chambered in fourteen different calibers from 22-250 to .375. These options give you long-range and hard-hitting bullets. The lever action guarantees reliable and quick feeding.

The weapon weighs around seven pounds and is bulky compared to any other survival rifle that we’ve mentioned. Once the Browning is broken down, it still fits in a hiking pack though, and it is relatively easy to strap to the side or top. This rifle is an awesome choice when you need a full-sized and full-powered rifle to take game, especially at longer ranges. Browning has a winner with this rifle. I only wish it was easier to find.

You may also enjoy reading an additional Off The Grid News article: 10 Practice Drills Guaranteed To Make You A Highly Skilled Concealed Carrier

Do you have any other suggestions for survival rifles suitable for self-defense? Let us know in the comments below. 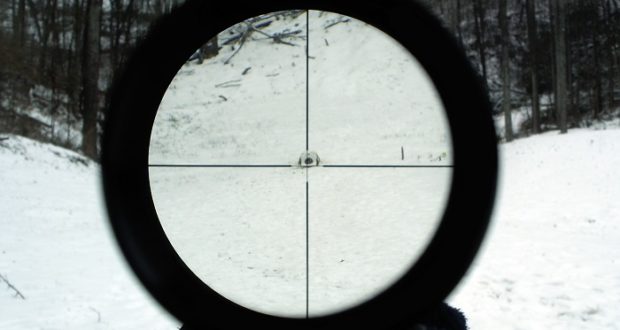 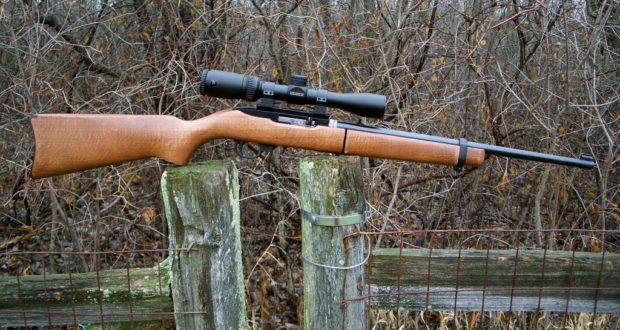 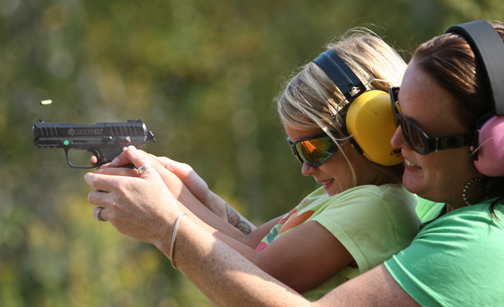 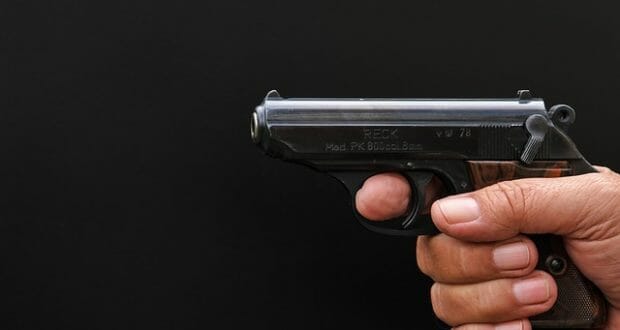 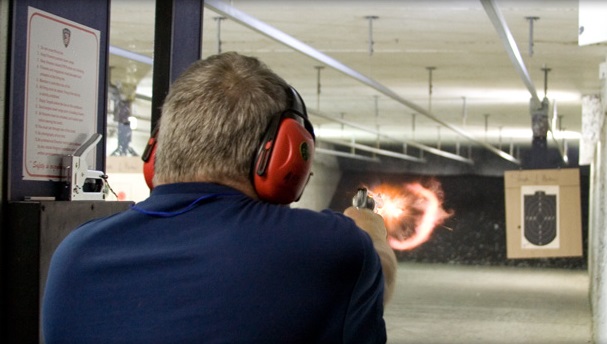 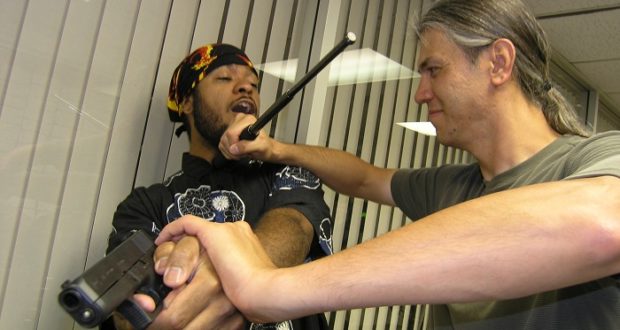